Chaos, Distributions, and a Simple Function

The iteration of a function \(f^n\) is defined as: 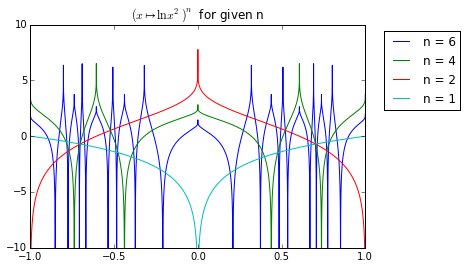 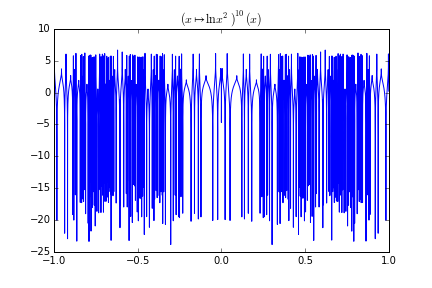 Note specifically how the function erases its input. There seems to be no correlation between input and output. This means that the ITLOGSQ system is chaotic: change the inputs slightly to get a major variation in the output.

We can look at ITLOGSQ another way: how it distributes its values. For example, here’s what you get if you run a single iteration of ITLOGSQ on a value over and over again, collecting all the results: 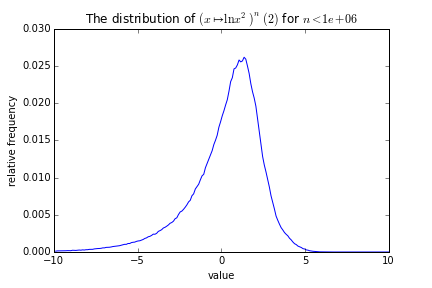 Note the smooth curve. Note that we started at 2 here, but we could have started elsewhere. We can look at the differences between the curves generated at different starting points:

What is the distribution of ITLOGSQ(n, x) if \(x\) is described by a uniform distribution? Well, here’s what happens: 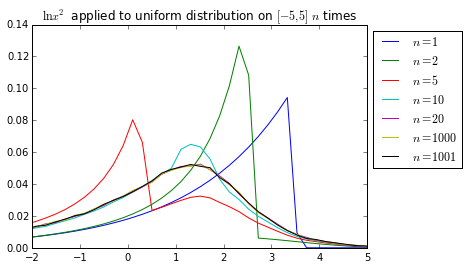 Interestingly, the limit curve looks a lot like the histogram above. This is no accident: since \(\ln x^2\) is basically uncorrelated with \(x\), randomly selecting numbers and putting a number through the filter over and over again are pretty much the same general idea. Since the sequence converges so quickly, we’re basically sampling the same distribution over and over again for the histogram, therefore, we have similar values.

With the additional condition (from the fact that this is a probability distribution function):

And I can’t see any way to solve it, but it’s interesting that it can be represented so succinctly.

The code used to generate all of this can be found here. Note that some of the boxes take some time to run.